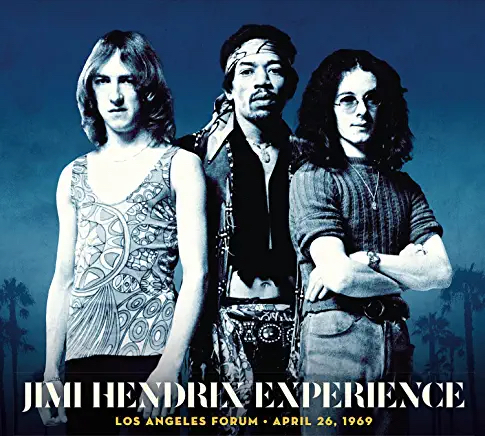 Los Angeles Forum – April 26, 1969 presents an extraordinary performance by the Jimi Hendrix Experience. Before a raucous, sold-out house, Hendrix, drummer Mitch Mitchell and bassist Noel Redding tore through a unique set featuring highlights such as “I Don’t Live Today,” “Purple Haze,” “Red House,” and an astonishing medley of “Voodoo Child (Slight Return)” and Cream’s “Sunshine Of Your Love”. This pristine recording, newly mixed by Hendrix’s longtime engineer Eddie Kramer, captures the original Jimi Hendrix Experience in their unrivaled, peak form. A portion of this performance was previously included as part of a short-lived Westwood One radio documentary box set [Lifelines 1990-1992] but has been unavailable in any form for two decades and this marks its first release on vinyl. The album – complete with liner notes from ZZ Top’s Billy Gibbons who witnessed the show first hand – is available on CD and 2xLP and the digital release marks the first Hendrix album available in spatial audio. Each format gives this seminal performance its proper platform, presenting the complete performance mixed directly from the original eight-track master tapes.

This website uses cookies to improve your experience while you navigate through the website. Out of these, the cookies that are categorized as necessary are stored on your browser as they are essential for the working of basic functionalities of the website. We also use third-party cookies that help us analyze and understand how you use this website. These cookies will be stored in your browser only with your consent. You also have the option to opt-out of these cookies. But opting out of some of these cookies may affect your browsing experience.
Necessary Sempre abilitato
Necessary cookies are absolutely essential for the website to function properly. This category only includes cookies that ensures basic functionalities and security features of the website. These cookies do not store any personal information.
Non-necessary
Any cookies that may not be particularly necessary for the website to function and is used specifically to collect user personal data via analytics, ads, other embedded contents are termed as non-necessary cookies. It is mandatory to procure user consent prior to running these cookies on your website.
ACCETTA E SALVA